Volubilis: Volubilis is an ancient Roman city where archaeological remains are best preserved and most visited of Morocco. The area was declared a World Heritage Site by UNESCO in 1997. It occupies 40 hectares and is located 33 kilometers north of Meknes. Although it is best to walk discovering the ruins, there are some points that you can not miss, as the forum, the basilica and the temple of Jupiter, the baths, the Arch of Caracalla and the beautiful mosaics. Guided optional. 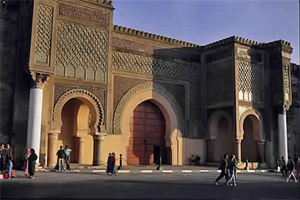 Meknes: Meknes is the most modest of the four Imperial Cities of Morocco, which makes it a different, much quieter and relaxed than Fez, Marrakech and Rabat. Meknes is surrounded by fields, with agricultural products one of the foundations of the city’s economy. Interestingly, this region produces the largest quantity of wine from Morocco, which is already in itself surprising, since Muslims are forbidden to drink alcohol. Here you can visit the souks, Place el-Hedim: Plaza el-Hedim (which is what Meknes Jamaa el Fna is Marrakech), the Dar Jamai Museum, the Mausoleum of Moulay Ismail, the Madrasa Bou Inania …